Honored to Receive the Patriot Award 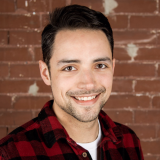 At Diversified Automation we are dedicated to employing innovative engineers who are experts in their field. Our team currently consists of more than 150 engineers and project managers, including individuals who are past and current members of our Armed Forces.

We are thankful for the members of our team who have served our country, including veteran sailors, soldiers, and airmen as well as a Marine Reservist, Captain Jacobsun M. Murphy.

Last month, our commitment to supporting members of our Armed Forces was recognized by Jake. On June 22, 2018 we were honored to receive the National Guard and Reserve Patriot Award presented by Brigadier General (Retired) Greg Nelson of the Kentucky Air National Guard. 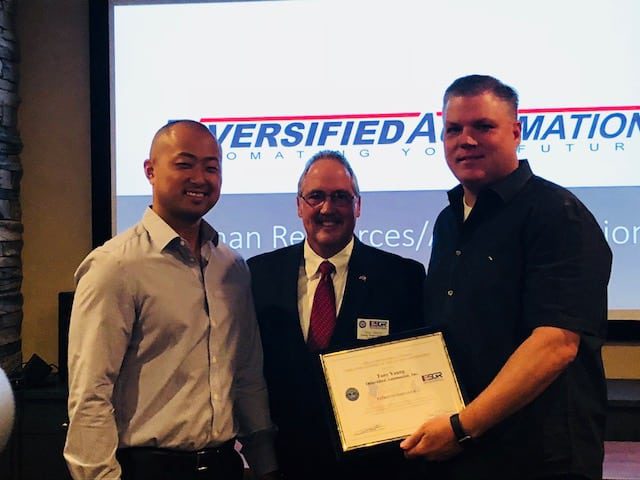 The Patriot Award: Employers who support a strong National Guard and Reserve force

Employees nominate their employer for the Patriot Award when they exemplify support for employees who are members of the National Guard and Reserve force. Supportive employers not only maintain contact with employees while they are on annual training or mobilized, but also participate in ESGR programs, publicly acknowledge the contributions of Reserve component employees, and support Guard & Reserve employee families during mobilizations.

Additionally opportunities to support our National Guard and Reserve members comes in the form of structured policies and benefits, such as having a published leave policy, providing pay differential during periods of military training and mobilization, providing paid military leave, and continuing insurance and monetary benefits during mobilization.

We are incredibly thankful for Jake’s service to our company and to the nation. Jake is a Captain in the Marine Corps with 5 years of service and is the Executive Officer of Company A, 4th Combat Engineer Battalion in Charleston, WV. As a member of the Marine Corps, Jake commands Marines in a Combat Engineer line company on the Division side. acts as advisers and subject matter experts in mobility, counter-mobility, and survivability.

He has also worked with Diversified Automation for 4 years as an Engineering Coordinator.

In regards to his experience working at Diversified Automation, Jake had this to say:

“in 4 years, the daunting amount of work and demanding timelines place a severe level of responsibility on every single employee – even more so because we are growing so rapidly and trying to hire enough personnel to scale adequately. I have had projects to manage but also had the responsibility of running the operations and staff of a company of Marines, made more demanding due to a shortage in SNCOs and officers.

Although my absence for military obligations throughout the year created even more hardship, Tony constantly reinforced that my military obligations weren’t a burden, but that he was appreciative of my service. Since I joined DAI in 2014, I have had to miss countless months of work for military training, planning conferences, and the constant duties of commanding Marines. There hasn’t been a single occasion that I was made to feel reluctant or guilty or that I should adjust to fit the company’s demands. That level of support allowed me to serve my Marines better, and for that I am grateful.” 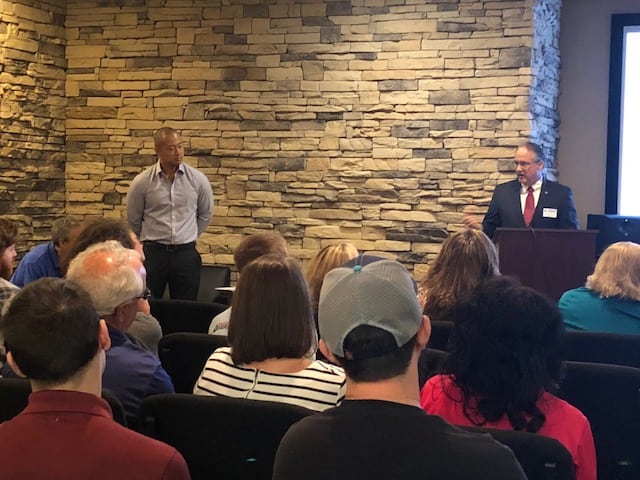 We are honored to have had General Nelson present the Patriot Award to our company.

For over 15 years we have been building a team dedicated to turning our customers into raving fans through quality service, industry expertise, and creative collaboration. And we encourage each team member to take every aspect of their job personal, but also encourage our team members to excel outside of the office as well. By supporting one another and fostering professional growth for every employee, we have developed a workplace that stands out in our industry. Learn more about our team and how you can become a part of it by checking out our careers page.

We are Automation experts in the Automotive, Baggage, E-commerce, Manufacturing, and Parcel Industries.

END_OF_DOCUMENT_TOKEN_TO_BE_REPLACED

We are eager to hire qualified individuals who are willing to put forth the effort to hone their skills and develop their career.

END_OF_DOCUMENT_TOKEN_TO_BE_REPLACED

This website uses cookies to improve your experience while you navigate through the website. Out of these, the cookies that are categorized as necessary are stored on your browser as they are essential for the working of basic functionalities of the website. We also use third-party cookies that help us analyze and understand how you use this website. These cookies will be stored in your browser only with your consent. You also have the option to opt-out of these cookies. But opting out of some of these cookies may affect your browsing experience.
Necessary Always Enabled
Necessary cookies are absolutely essential for the website to function properly. These cookies ensure basic functionalities and security features of the website, anonymously.
Functional
Functional cookies help to perform certain functionalities like sharing the content of the website on social media platforms, collect feedbacks, and other third-party features.
Performance
Performance cookies are used to understand and analyze the key performance indexes of the website which helps in delivering a better user experience for the visitors.
Analytics
Analytical cookies are used to understand how visitors interact with the website. These cookies help provide information on metrics the number of visitors, bounce rate, traffic source, etc.
Advertisement
Advertisement cookies are used to provide visitors with relevant ads and marketing campaigns. These cookies track visitors across websites and collect information to provide customized ads.
Others
Other uncategorized cookies are those that are being analyzed and have not been classified into a category as yet.
SAVE & ACCEPT